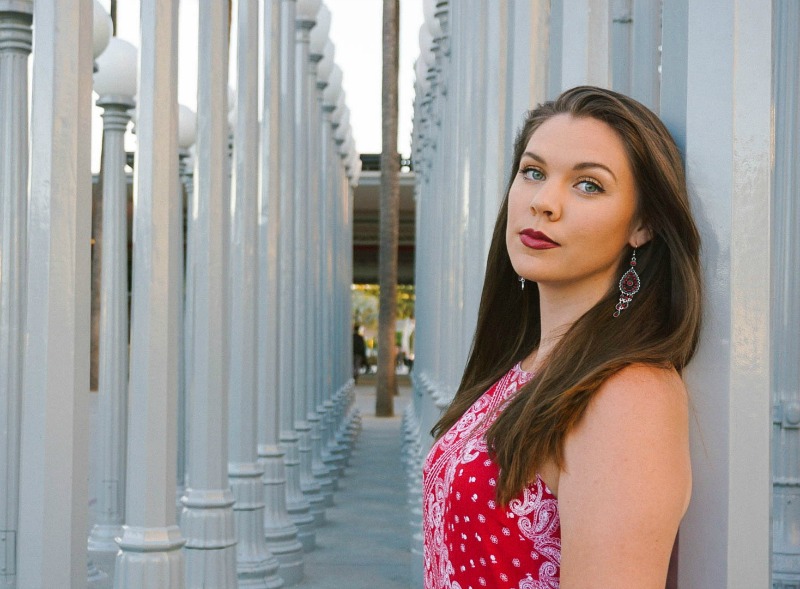 There is nothing in the world to me that screams “summer” more than the smell of freshly cut grass, barbecues, and a flirty bandana dresses.  Growing up, all the cool kids would tie bandanas around their chests as a sort of makeshift tube top.  As I got older, I realized that the bandana-as-a-shirt look may not be so great, but wearing a bandana print in less 90s inspired way is still totally cool!  Hence, this bandana dress! 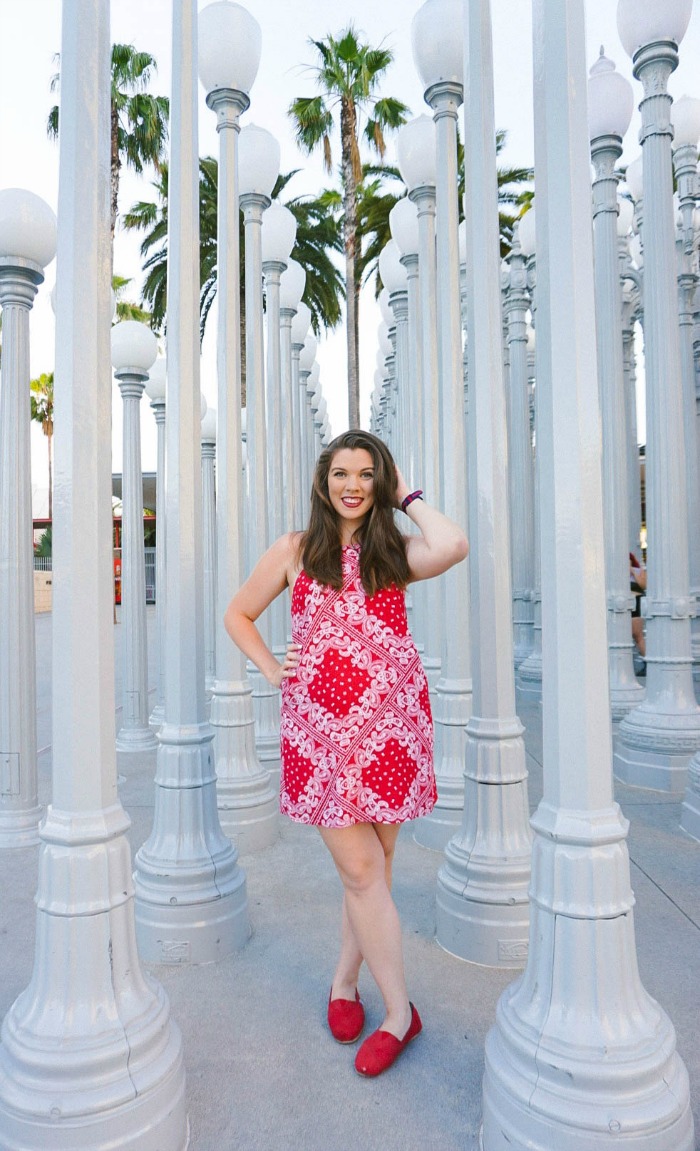 Let me just jump right in by saying this photoshoot was one of the most fun shoots I’ve done to date. When I moved to LA, I always wanted to get a set of those “iconic blogger photos next to those cool, tall, grey lamps that all the successful bloggers have”.  While I know that’s kind of a silly thought, it was a shoot that was always on my bucket list, and how it happened was completely unexpected! 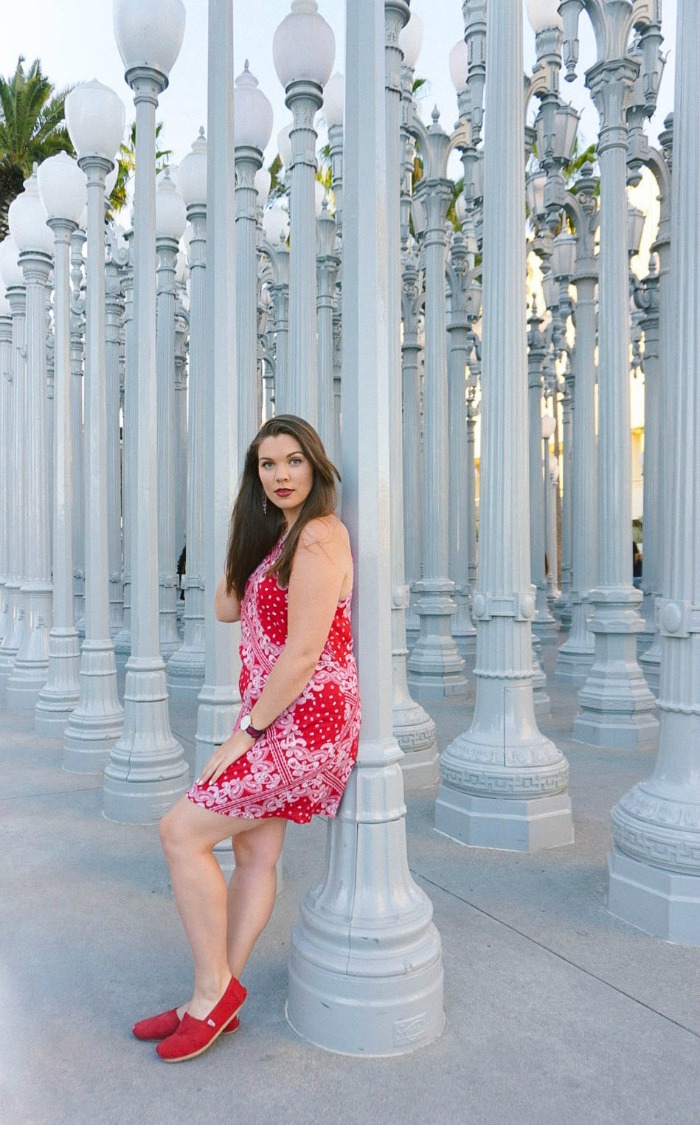 The very first time I tried to go to LACMA, my boyfriend and I strolled up on a Wednesday and the man standing outside told us it was closed on Wednesdays, which is SO random, but true!  We ended up grabbing food at a food truck parked outside and then going to the Petersen Automotive Museum (across the street) instead.  It was really awesome if you’re into cars (which, spoiler alert – I most definitely am).  Anyways, we couldn’t go to LACMA that trip, and didn’t take any photos, so just made a mental note to come back at another time. 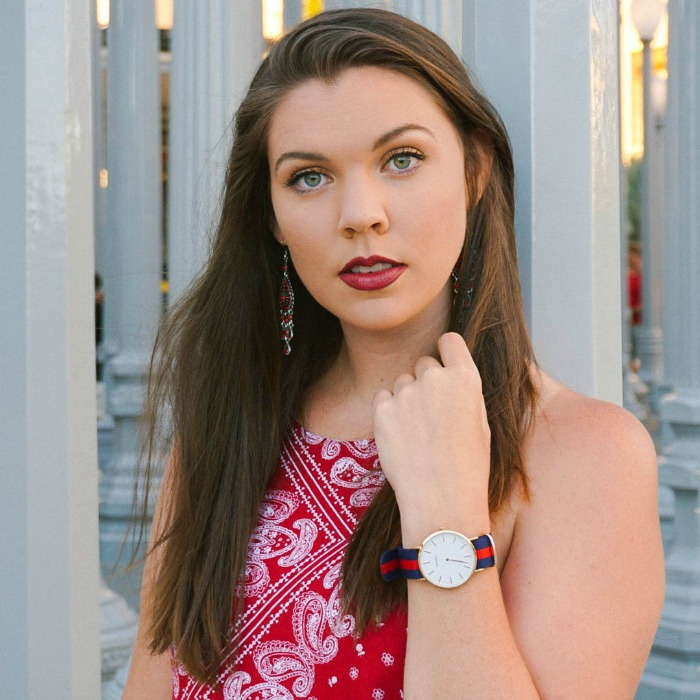 A few weeks ago, I was taking photos with Mickey of The Boho Socialite for a couple of posts including my last post, Date Night Little Black Dress With Tobi.  After we shot that post and moved on to our secondary location we realized the lighting was HORRIBLE.  I mean, like, shooting in darkness, grainy images, no matter what we did it wouldn’t work.  We were sort of close to LACMA and when she suggested that in her list of alternate locations and I jumped on it. 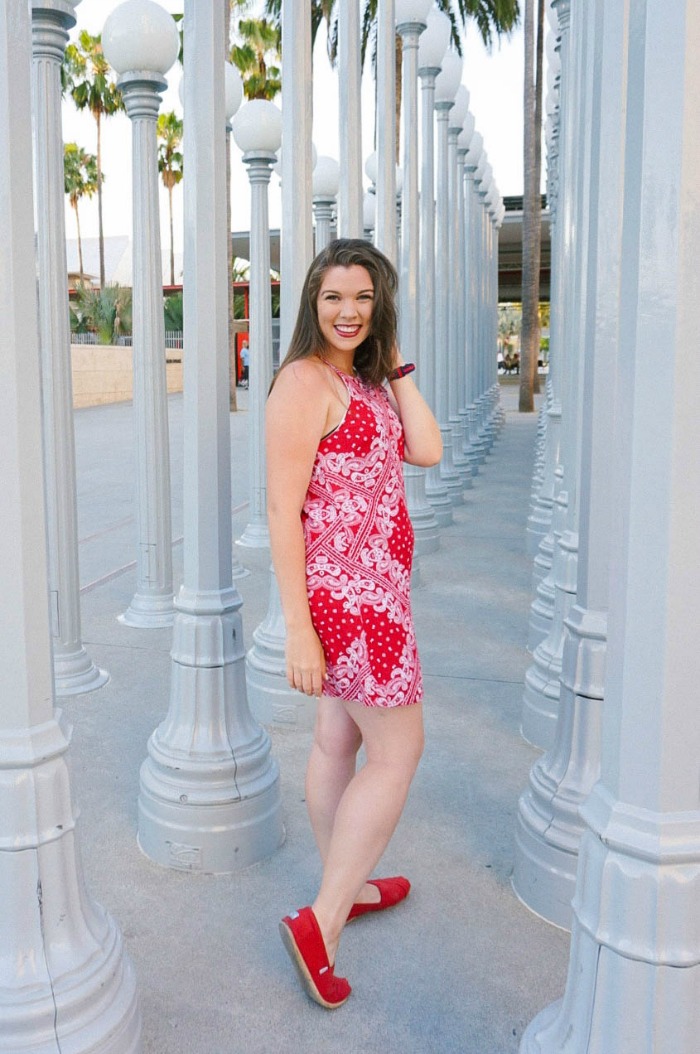 I mean, I had always wanted to play around near those lamp poles after all.  The sun was setting and we weren’t even sure the photos would turn out, but they’re some of my favorites to date.  Not only are the photos some of my favorites, but the dress is too!  This Bandit Bandana Print Shift Dress I’m wearing was given to me by Tobi.  It’s super comfortable and PERFECT for summer.  I wore it to a surprise birthday party after the shoot and got so many compliments on it.  It’s one of those dresses that’s just eye-catching and fun!

I also love that this dress is red.  Red always makes me feel sexy and flirty even if it’s a more causal piece like this dress.  Plus you can pair it with a dramatic red lip, which I find myself doing any time I can.  I love Ecco Bella’s Lipgloss in Passion, because it is stays on for a long time and is also not sticky.  I have gotten rid of so many cute lip glosses because they’re sticky, and this one is not at all, which is awesome.  It’s under $20, and definitely worth the money. 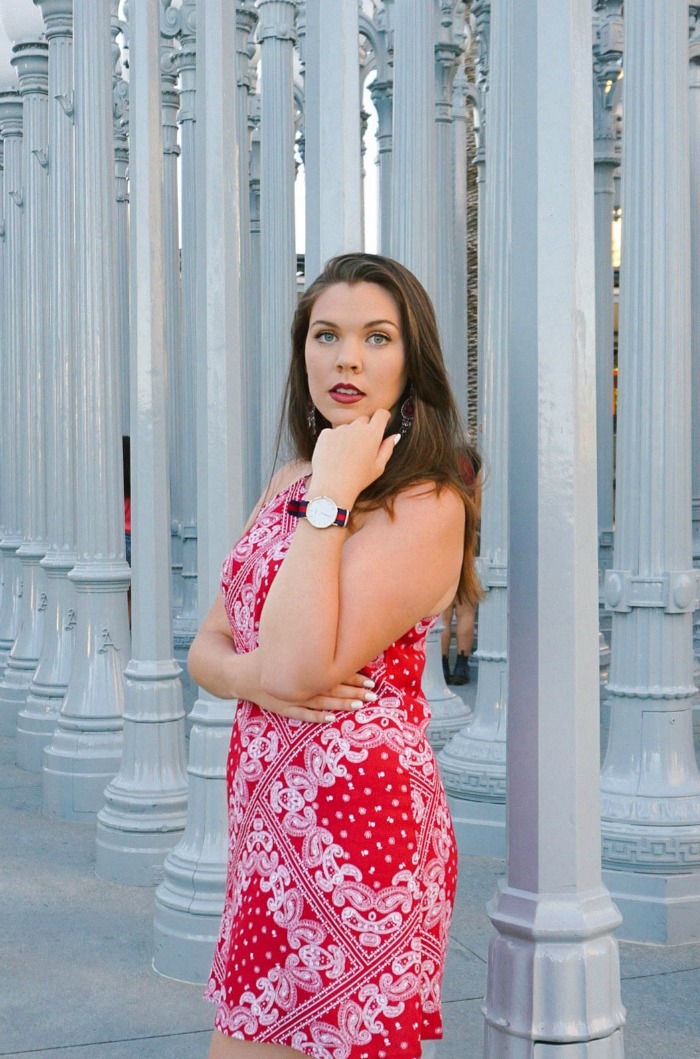 I kept the styling pretty simple with this dress since the print is so bold.  I paired it with some red dangle earrings, and a blue and red striped watch.  It’s actually a men’s watch, but I love big faces on watches, so I made this one unisex.  ? Plus, it just matches so well with the dress that I couldn’t NOT wear it! 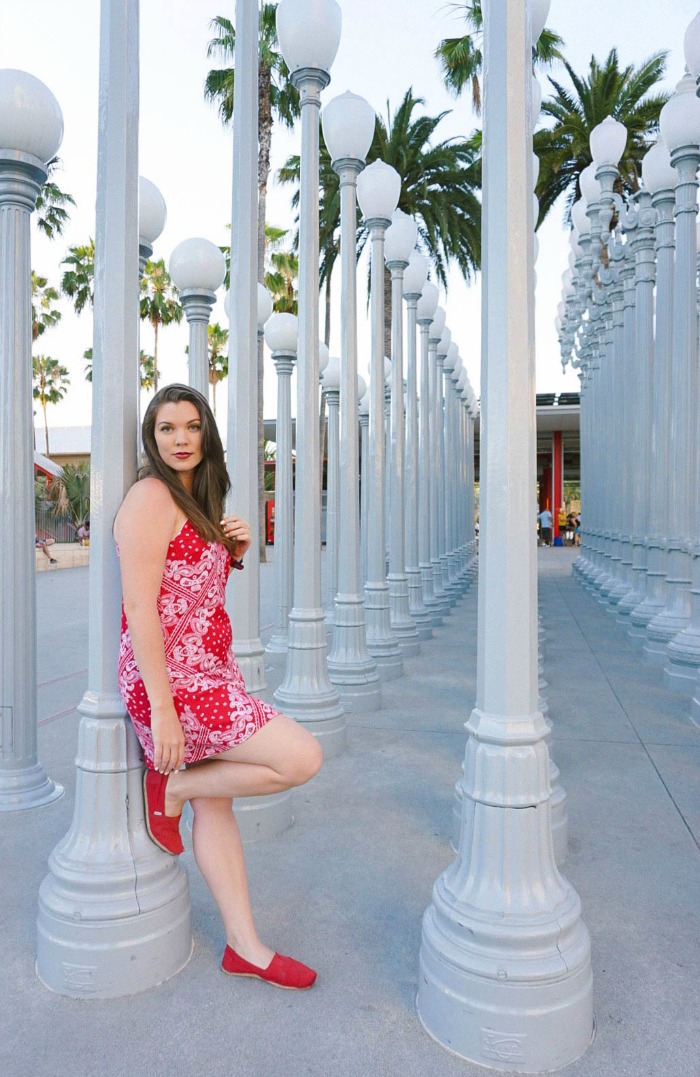 One of the things I love most about this Bandit Bandana Print Shift Dress is that it’s so cute as a causal dress.  I find that most of my dresses are more fancy, and since they are I normally wear heels with them.  This dress – I get to be more causal.  Don’t get me wrong, I LOVE wearing heels, and embracing my inner amazon woman.  I’m 5’8″, so with my normal 4-5 inch heels it makes me over six feet tall!  I love being tall, but sometimes I just wanna wear flats, ya know?  This dress lets me wear my Toms, #1 because they match perfectly, and #2 because it’s casual enough to wear flats with.  YAAASSSS. 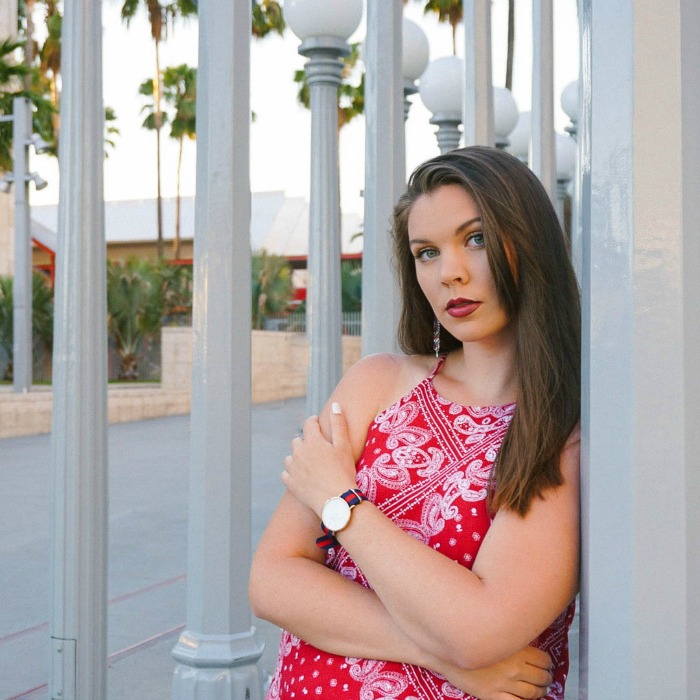 Since this dress is such a great casual option it’s perfect to wear for exploring LACMA.  Since we were out so late taking photos we actually missed the museum being open.  One day, I swear, I’ll make it inside the museum, but today was not the day.  ?? 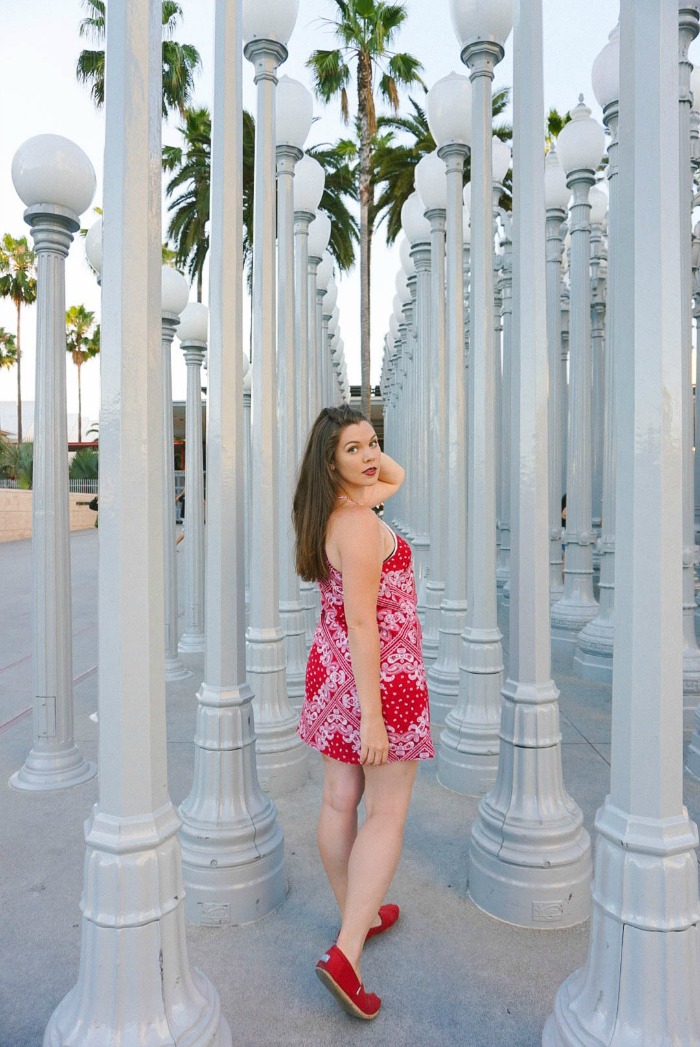 To avoid missing the museum being open I’ve researched the times so that next time I go I won’t be left standing outside per usual.  If you wanna check it out, LACMA is open Monday, Tuesday, and Thursday from 11am–5pm.  It’s also open Friday from 11am–8pm and Saturday & Sunday from 10am–7pm. 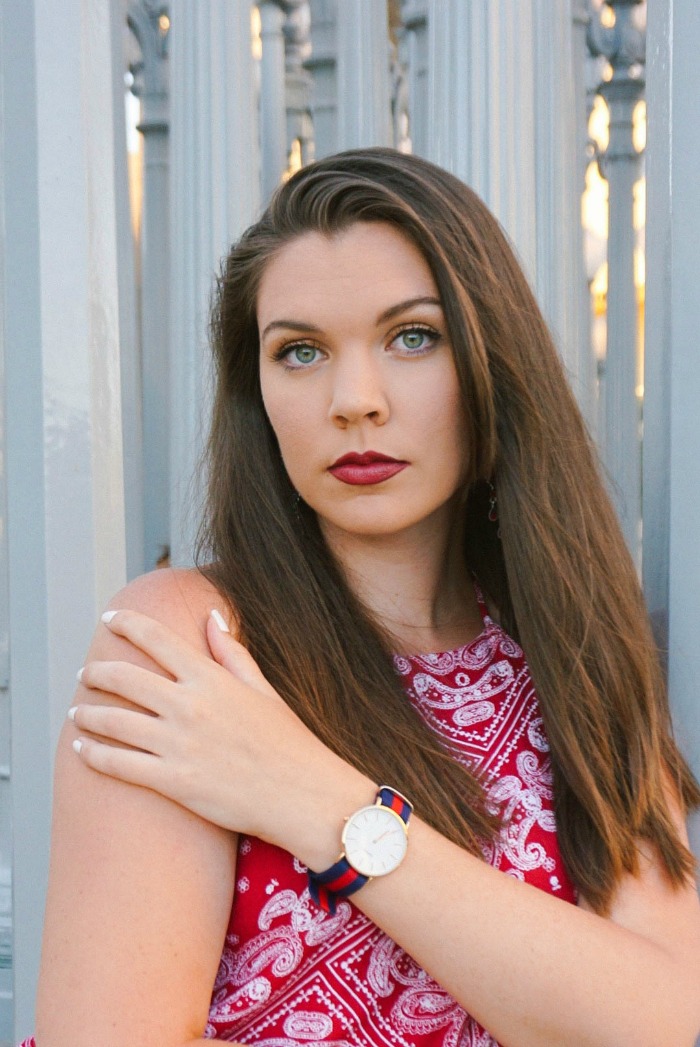 It must have been fate all of the times I missed seeing LACMA because I recently found out there’s some great ways you can get in for free like showing your Los Angeles drivers license any weekday after 3pm.  Check out all the ways to see LACMA for free. 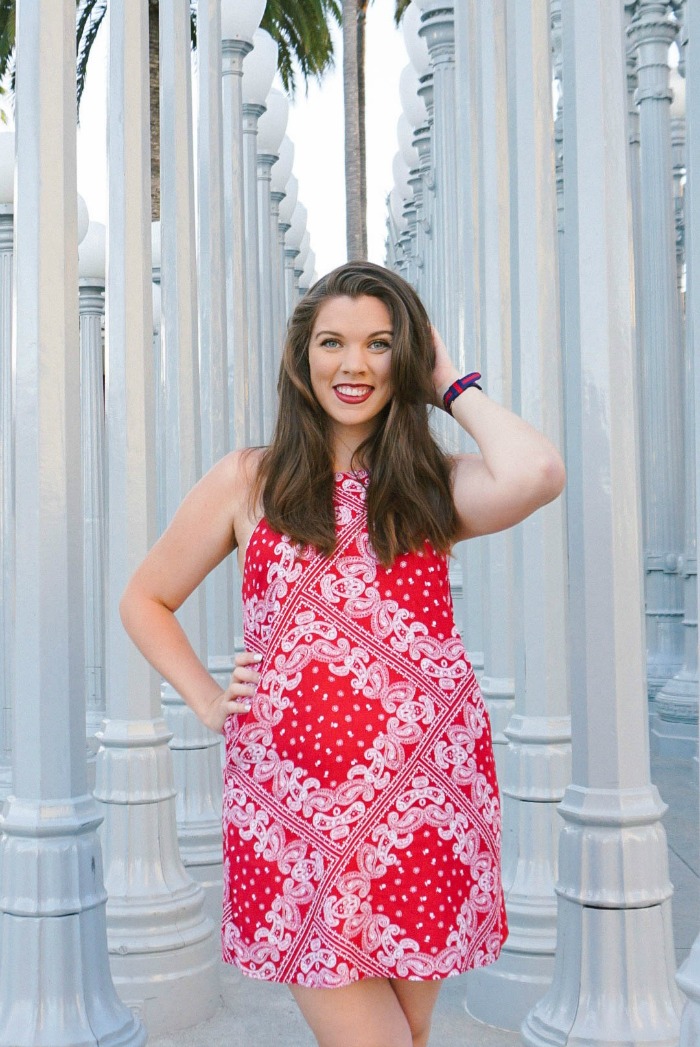 And if you wanna be twinsies with me, you can always grab yourself your own Bandit Bandana Print Shift Dress! I seriously love this dress.  I’ve worn it so much since Tobi sent it to me – to LACMA, to a birthday cookout, to a job interview, around the house/running errands and I’m actually doing laundry right now so I can wear it this week. Let me just say, I hate doing laundry.  I know that sounds like such a bizarre thing to say, but in LA, laundry is such a struggle.  No one (unless you’re fancy AF) has laundry in their actual apartments, and some don’t even have laundry in the whole building. 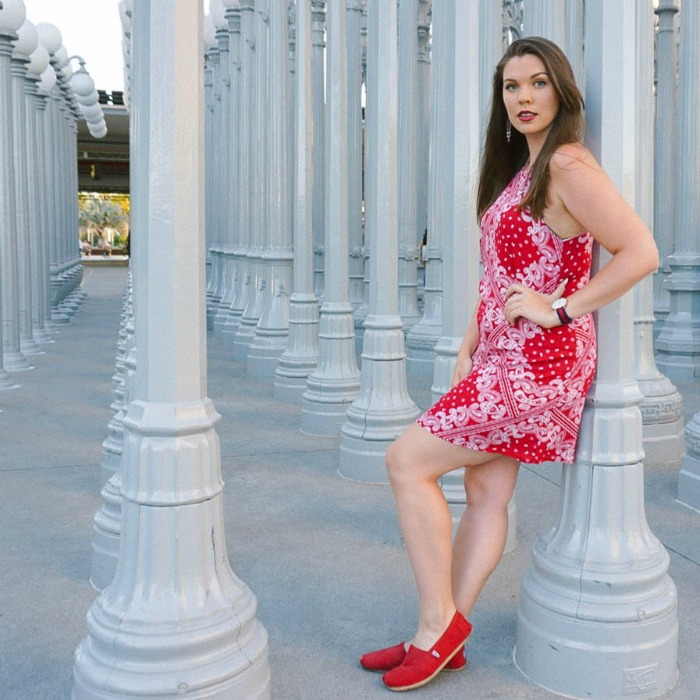 I have laundry in my building but I still have to go get quarters every time (normally half way through the loads).  Then I have to walk down the super creepy basement steps (it probably doesn’t help that I watch way too much Criminal Minds and do my laundry late at night), and set timers so that I’ll be the first one back down there when my loads end.  Plus doing all my laundry normally ends up costing a whole roll of quarters AND takes hours because we only have two machines for the building and one of them is usually broken.  All of that is to say, the fact that I do laundry MORE OFTEN specifically so I can wear this dress really shows how much I’m obsessed with it. 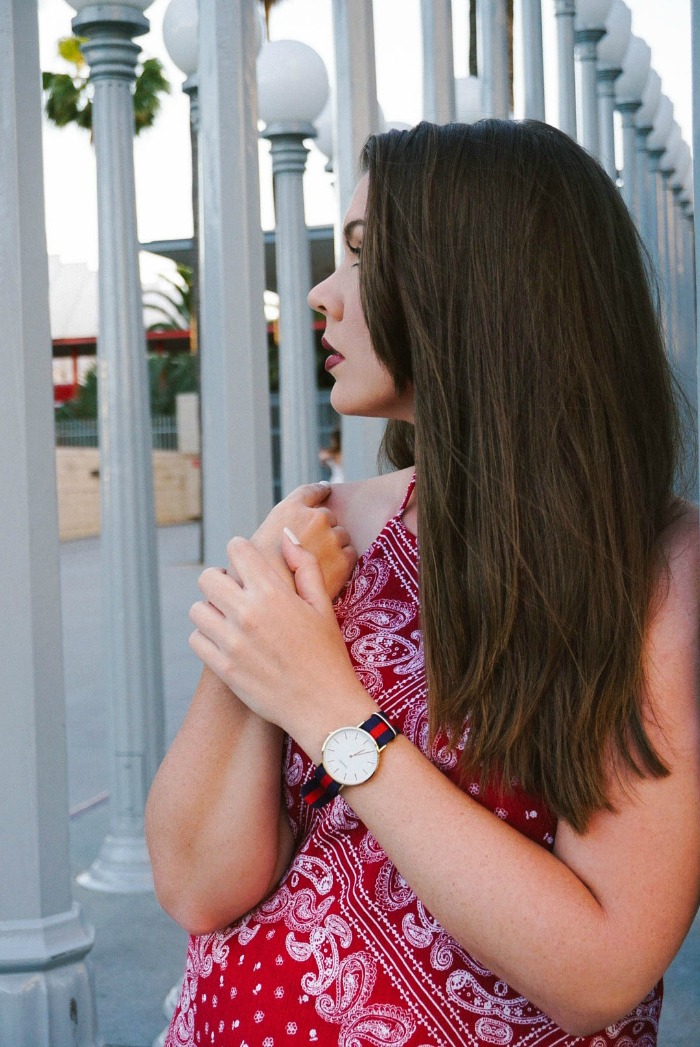 I think the reason I love it so much is because It’s great for a casual day running errands or something a little more dressy if you so desire!  It’s also the perfect all around summer dress because it’s so lightweight.  I foresee many days full of wearing this summer bandana dress, cookouts, beach bonfires and hopefully a successful trip to LACMA in my future! 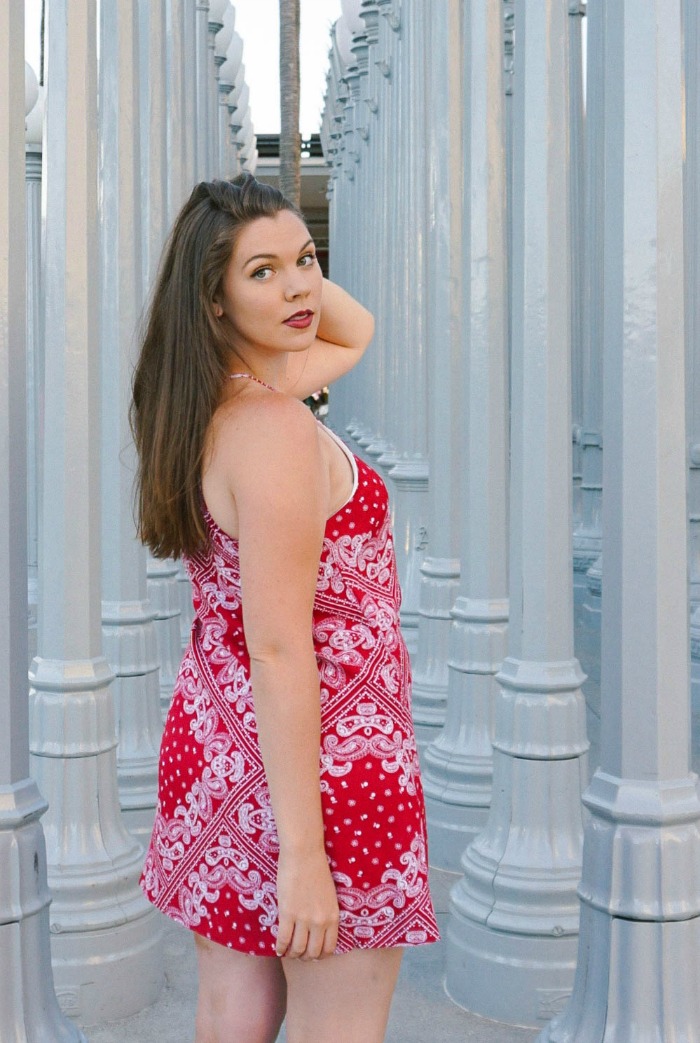 That’s all for now, and I hope if you’re in LA, you can make your way to LACMA and take your own photos near these cool lamps.  Do you have any favorite photoshoot locations?  Let me know below in the comments! 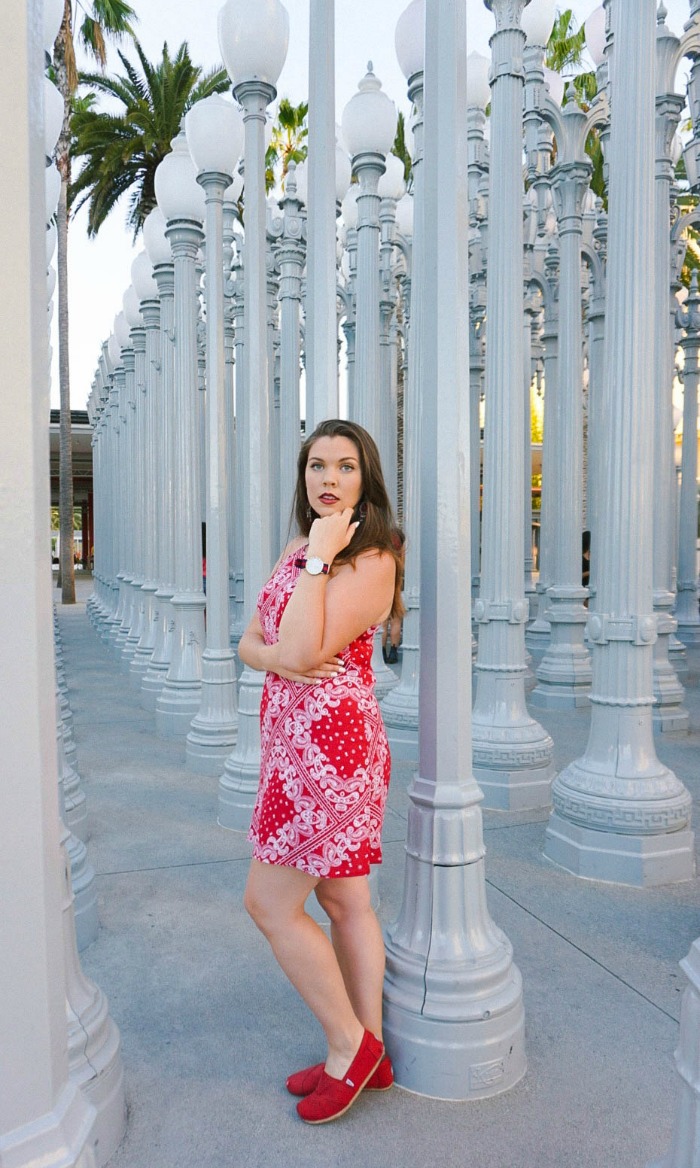 Thank you Tobi, for this fun summer bandana dress. 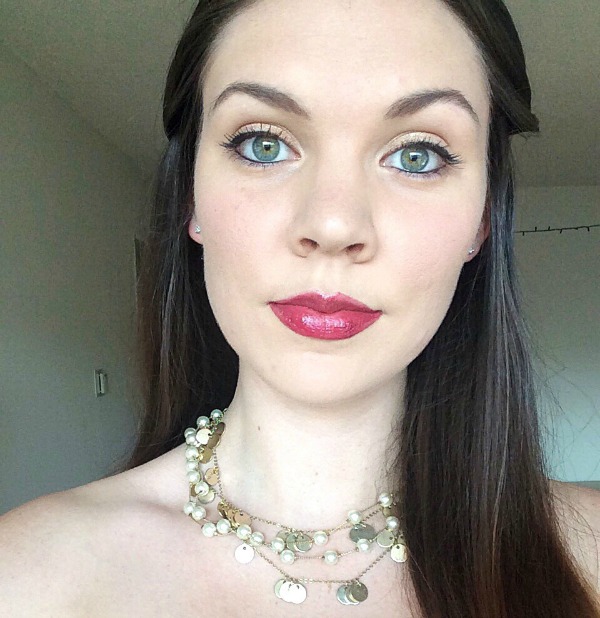 The Vogue Voyager is a blog all about fashion, travel and celebrating the little moments in life. I can't wait to share all of my style adventures with you!

The Vogue Voyager is a participant in the Amazon Services LLC Associates Program, an affiliate advertising program designed to provide a means for sites to earn advertising fees by advertising and linking to amazon.com. As an Amazon Associate I earn from qualifying purchases.

This website uses cookies to improve your experience while you navigate through the website. Out of these, the cookies that are categorized as necessary are stored on your browser as they are essential for the working of basic functionalities of the website. We also use third-party cookies that help us analyze and understand how you use this website. These cookies will be stored in your browser only with your consent. You also have the option to opt-out of these cookies. But opting out of some of these cookies may affect your browsing experience.
Necessary Always Enabled
Necessary cookies are absolutely essential for the website to function properly. This category only includes cookies that ensures basic functionalities and security features of the website. These cookies do not store any personal information.
Non-necessary
Any cookies that may not be particularly necessary for the website to function and is used specifically to collect user personal data via analytics, ads, other embedded contents are termed as non-necessary cookies. It is mandatory to procure user consent prior to running these cookies on your website.
SAVE & ACCEPT